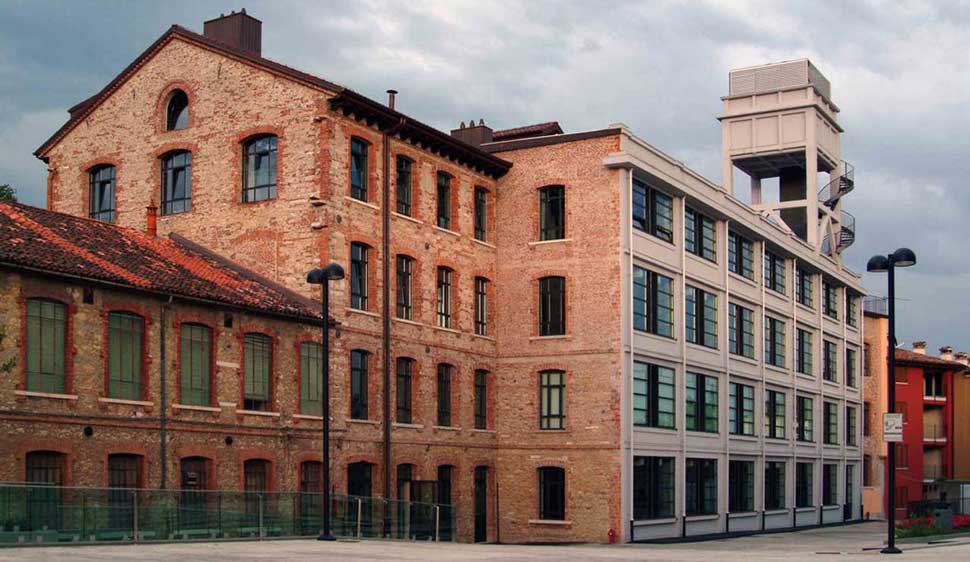 The factory dedicated to Giovanni Battista Conte is located in the intersection between Via Pasubio and Via XX Settembre and is one of the oldest existing woolen mills in the City (1757).
G.B. Count procured raw materials to the artisans of the area for first and then became himself an entrepreneur.

The area enclosed by high walls - and recently built with new buildings - belonged entirely to the Conte family and it extended over an area of 3 hectares, in which there were the original mill, the residence and the manor park.

Since 1860 the mill and the area was subject to important changes and renovations induced by the development of the near Rossi's industry.

In the first '900 Alvise Conte he replaced the low buildings erected from 1886 with a new spinning in armed concrete.

The oldest building, which from the beginning was equipped with all the facilities of the work process for the production of woolen cloth, is placed along the course of the Maestra Canal; This body then housed the reception and offices.

The façade realized in brick and stones presents arched windows surrounded by bricks, while in the the roof it is still possible to notice the bell that articulated the turns of job.

Joined this building, a plant in iron and wall coverings made from 1866 to 1884 rises for 4 floors. In 1929 another structure was added and also the turret with two reservoirs of water fireproof.

The particularity of this structure is the tent Shed, projected in 1906 from the engineer Carlo Letter and absolutely realized in incombustible armed concrete with coverage to Shed, typology and material were the state-of-the-art one for the epoch, particularly used in the industrial architecture by which he can obtain a very uniform illumination daytime.

The complex has been restored and hosts exhibitions and cultural events such as the annual exhibition of orchids that draws enthusiasts from all over Europe.