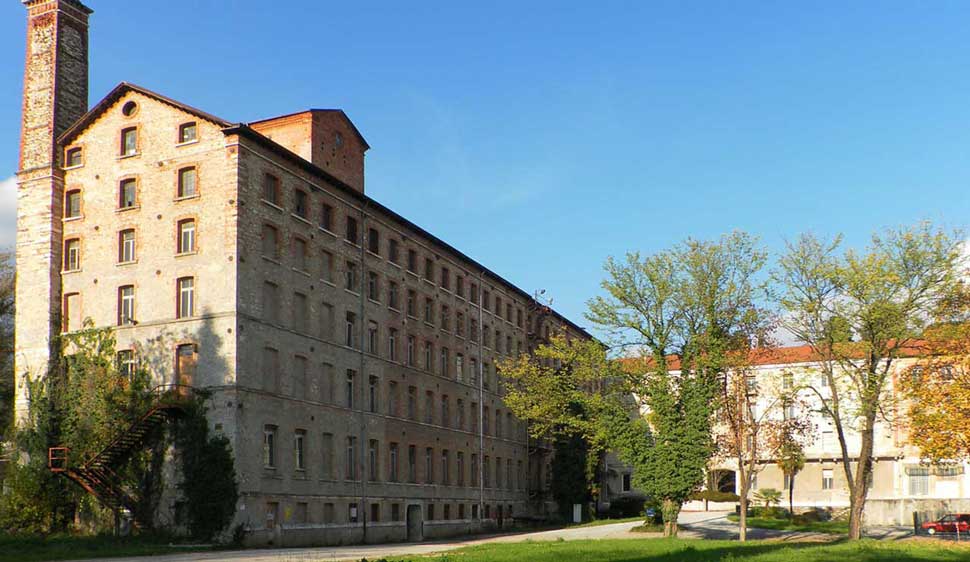 Another example of the city industriousness in the textile sector

Not away from Conte plaza, under the hill of the Castle, the so-called Tall Factory rises, true symbol of Schio, together with the Castle, the Cathedral and the "Omo", testimony among the most remarkable to European level of the industrial architecture ofthe nineteenth century, today patrimony of Industrial Archaeology.

The tall chimney of quadrangular form with elegant pediment polls beside the central body of the abandoned workshop and recalls from nearby, in its functional architecture, analogous buildings of the north Europe. Erected in 1862 on project of the Belgian architect August Vivroux, the grandiose complex detaches in the northwest landscape of the city with its reddish massive structure, formed primarily of tile of stones taken from the pebbly shore of the near stream Lèogra.

To the eyes of the visitor the tall factory imposes to him as a manufactured building of exceptional dimensions: nevertheless, despite the grandeur of its structures (80 meters long and 13 wide, spread over six floors and it counts 330 windows and 52 skylights), it seems to be elegant and balanced in the vast surfaces slightly marked by the windows in tile arched in the superior part and from the windowsills.

Here's how Alexander Rossi describes his Work to Felice Lampertico in a letter:

"In nine months I have erected a factory of 80 meters length above, 13,90 of width with 6 floors over the ground, 125 columns of ghisa, 330 windows with all the conveniences of water and vapor for service and heating with the lost vapor.We applied a steam engine of 50 horses, with 2 boiler of the weight of 28/mK. This machine is joined with the hydraulic whirlwind of over 50 horses, they can work together or alternatively. The  new factory performed on the style of those Belgies and English, designed by a primary architect of Verviers that was here eight days and it put again afterwards all the plans in great, can serves as a model for similar buildings in Italy. Economics and strength, light, space, industrial style unites together in a perfect combination and it would not stop being grandiose also in England.... "