The Train of Solidarity 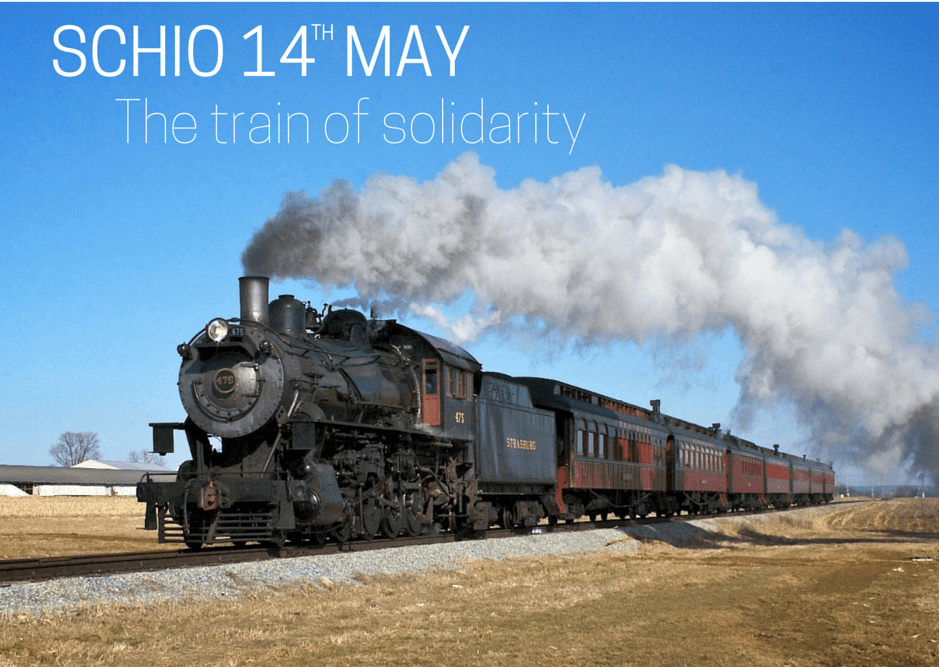 Retrieve the glorious tradition of the steam train on the Vicenza-Schio rail line Saturday 14 May becomes a party along traditions and cities; initiative to involve citizens, especially students of primary schools, the attention and care of its territory, people and relationships that characterize it.

The simple gesture of welcome children aboard, handicapped and people on the margins often forgotten, radiates in the territory and institutions a message of solidarity able to reach the mothers and children who need care and support in Africa south of Sahara. The steam train ride is also an opportunity to call attention to the importance of ensuring the maintenance and improvement of this historic railway line active since 1876.

The charming experience of the trip on the steam train, in fact, is reserved primarily for students of the fifth class of primary schools in the towns of Vicenza, Cavazzale, Dueville, Villaverla, Thiene, Marano and Schio, involved in a research project on the historical origins , social, economic, of the Vicenza-Schio railway line and the steam train in general.

During the ride the access to the train it is restricted to guests only.

Medici con l' Africa Cuamm is the first Italian organization that is spent for the promotion and protection of the health of African populations. Its history tells the professional and human adventure of more than 1,500 people sent in 41 countries of intervention, to bring also care and services to those who live in the poorest places in the world. An adventure begun in 1950 and never interrupted, which now sees alongside local doctors and nurses in hospitals,
in the districts, in the schools and universities of Angola, Ethiopia, Mozambique, Sierra Leone, South Sudan, Tanzania and Uganda.

Ferrovieri con l' Africa is a group of train conductors and drivers of Trenitalia Veneto regional transport, pledged in 2015 to support the project "Prima le mamme e i bambini" of Medici con l' Africa Cuamm to redouble in five years the number of assisted deliveries in four districts of Angola, Ethiopia, Uganda and Tanzania.

DO YOU HAVE TO DINE? AT HOTEL MIRAMONTI YOU CAN!

Following the new Prime Ministerial Decree of 25 October 2020, bars and restaurants are obliged to interrupt the supply activities at 6.00 pm, derogating to the take-away service till 24.00

In collaboration with Osteria Due Spade which will carry out the home delivery service, we are happy to be able to inform you that from Monday 26 October 2020 we guarantee dinner from 6.00 pm to 9.00 pm!

We provide our saloon on the 1 floor, properly set up, scrupulously observing the current anti-covid regulations, maintaining the spacing between the tables with a maximum capacity of 4 people.

WHAT ARE YOU WAITING FOR BOOK? By calling us directly at 0445 529900 or by sending an email to info@hotelmiramonti.com.

Oh we forgot that we offer cover and water! For wine, on the other hand, you can choose from the proposals of the Osteria Due Spade, in combination with the chosen dishes

Together we can and must start again.

Thank you all very much!